Every year in December, millions of Amnesty International supporters from around the globe take part in the world’s biggest human rights event, Write for Rights.

Write for Rights sees people come together to write letters for those whose basic human rights are being attacked. Last year alone, our supporters took over 5 million actions, and in doing so, helped right some of the world’s biggest wrongs.

The idea of Write for Rights was born in Poland when a young man, Witek, tried to impress a young woman, Joanna, at a festival in Warsaw. She told him about the 24-hour events she had been to in Africa, where people wrote letters to protest governments.

Inspired by her experience -and of course wanting to see Joanna again- Witek organised for his local Amnesty group to host a letter writing marathon, and in turn sparked a global letter-writing phenomenon.

Now 16 years later, the campaign still captures the essence of the movement by telling the powerful stories of individuals who have been persecuted for speaking out for their rights, their communities, families, loved ones, and even for you and me.

In December, we will write for women human rights defenders facing persecution. This includes women like Nonhle Mbuthuma, a South African activist leading the fight for her community to protect her ancestral land from being mined for titanium. In doing so, she has been harassed and threatened and even survived an attempt to kill her; but she won’t back down.

The more people who stand alongside Nonhle and her community, the more pressure we can place on government to ensure Nonhle is protected from further intimidation and harassment. 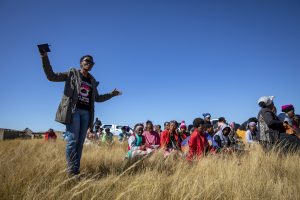 Will you join us in standing alongside Nonhle and the women human rights defenders who speak out for all of us? Your words have power.