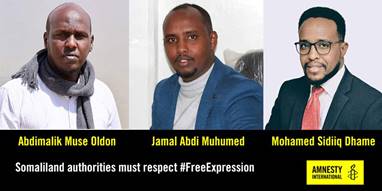 Between 17 April and 1 May, Somaliland authorities arbitrarily arrested and detained journalist Abdimalik Muse Oldon, opposition youth leader Mohamed Sidiiq Dhame, and Jamal Abdi Muhumed, an employee of the Ministry of the Interior. The three were arbitrarily arrested for posting on social media comments perceived as critical of the Somaliland government and public officials.

I am writing to you regarding the cases of Abdimalik Muse Oldon, Jamal Abdi Muhumed and Mohamed Sidiiq Dhame, who are currently detained by the Somaliland authorities solely for exercising their right to freedom of expression. The three expressed views on social media perceived to be critical of the Somaliland government.

Journalist Abdimalik Muse Oldon was arrested by Somaliland police on 17 April from his hometown of Burao for criticizing the president of Somaliland on his Facebook page, and transferred to Hargeisa. He was formally charged on 6 June with spreading anti-national propaganda and disseminating false news against Abaarso School. Abdimalik is currently detained at the Hargeisa Central Prison.

Jamal Abdi Muhumed, an employee of the Ministry of Interior, was arrested at his office in Hargeisa on 24 April over his Facebook posts criticizing the effectiveness of police services in Somaliland. He was charged on 19 June for insulting the police and insulting a public officer. Jamal is currently held at the Hargeisa Central police station.

Mohamed Sidiiq Dhame, the leader of the opposition Waddani party’s youth wing, was arrested on 1 May at his home in Hargeisa. Mohamed was arrested over a Facebook post in which he criticized the state of emergency imposed on three districts in the Sanaag region. He was formally charged on 8 June with offending the honour and prestige of the president, and incitement to violence. On 27 June, the Hargeisa regional court found him guilty of offending the honour of the president and sentenced him to six months in prison. Mohamed is currently detained at the Hargeisa Central Prison.

The arrest of the three individuals is arbitrary, as it was carried out without a warrant, hence violating Article 25(2) of the Somaliland Constitution, which states that the police must attain a warrant from a judge before arresting and detaining any individual.

I am calling on you to ensure the immediate and unconditional release of Abdimalik Muse Oldon, Jamal Abdi Muhumed and Mohamed Sidiiq Dhame, as they are being detained solely for exercising their right to freedom of expression. I also urge the government to fully respect, protect, promote and fulfil the rights to freedom of expression and personal liberty of everyone in Somaliland.

DETAINED CRITICS MUST BE RELEASED